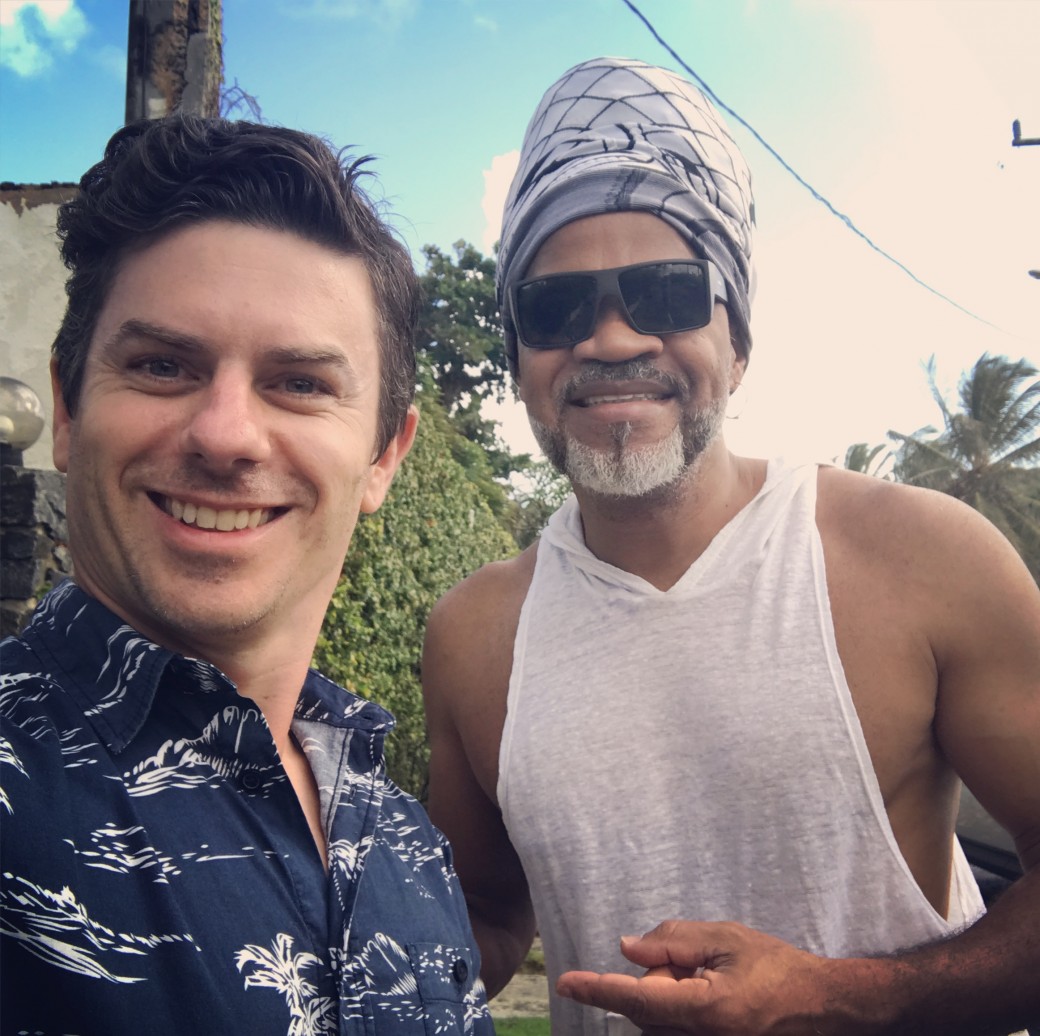 One of the proudest and best days of my life. I was able to meet Carlinhos Brown in Salvador. He is a singer, composer, percussionist and guitarist who has risen from the favelas to become one of Brazil’s best-known composers. He is a very friendly and open person, and was interested in my music as well. My life feels complete

It’s a pretty interesting story, as you can imagine!

I was given a suburb by my AirBnb hosts. I went there, hung around for a while on the beach, and eventually asked an old man – where does Carlinhos Brown live? He pointed to the house right next to where we were standing.

The doorman was absent. When he finally appeared, he said, yes Carlinhos Brown lived here until 5 months ago. He gave me his new address, so I quickly grabbed an Uber for the half-hour drive to get there. On the way I told my driver about my mission. So when we arrived, he was totally on board with it. When we arrived their doorman said, no, he doesn’t live here, he lives in the housing community opposite. So my driver takes us there and manages to get us past the man at the front gate, while finding out Carlinhos’ house number. He drops me at the house gate with a grin and wishes me luck.

I knock at the gate. An old lady, Elisabetha, appears. I explain my story in broken Portuguese. She says, yes, he lives here, but he’s out – he’ll be back in 2 hours. The wait begins. I sit on the grass under the palm trees, trying not to get sunburnt. Finally a car appears, a white Landrover. It pulls up at the gate. It’s him. He beeps twice before the gate is opened and he rolls inside. I wait anxiously.

Then another man appears on the street and comes towards the house. He asks me what I’m doing. I explain my story to him. He nods. He’s very interested in how I managed to find out where he lives. I try to explain. He says he will ask Carlinhos.

A few minutes later he comes back out and says, he’s very sorry, but it’s not possible, Carlinhos is too busy, unless you know him you won’t be able to see him. I do some very quick talking and a little bit of begging. In the end I think I made an impression on him by saying that Carlinhos might be interested in meeting me, too. He disappears again. It starts raining, then pouring. I manage to crouch by their front gate with my head under the mailbox, and avoid the worst of the rain. A forlorn mongrel slouches past with head down. I feel like an apprentice in a kung-fu movie, waiting for the master to let me in.

After about 15 minutes the drenching rain abates, and the sun comes back out. Now I’m standing in the scorching sun with no shade, but I dare not move in case Carlinhos comes out. Finally the doorman reappears, checks if I’m still there, and asks how did you avoid the rain? I gesture at the mailbox. He seems impressed. He says Carlinhos will come out. I can’t believe it.

I wait another 15 minutes in the hot sun, then I hear the house door open, then the car door open and close. Oh no, I think, he’s just going to drive off. He backs the car out of the driveway, stops, then the window descends. Then I’m looking at him. My mind is racing.

We greet each other quite casually, and he says, wait a minute. He parks the car on the road, gets out, and walks towards me. I’m twitching with excitement. We shake hands again. He’s wearing a white linen tank-top, white slacks, sunglasses, and his customary headpiece, which is somewhere between a turban and an African head-cloth.

We talk about this and that, I tell him I’m a singer, composer, percussionist and guitarist, and have 2 CDs out. I love his music, and have come a long way to see him. I tell him I’m doing some shows in Brazil then Europe. I ask if everything’s good with him? Tudo bom? He says tudo beleza, everything’s beautiful. I tell him I look forward to hearing his next releases. I forget what else we talked about.

Then he asks about my music. His English is pretty good, he asks where can he hear it? I say I’ll send it to him. I can’t believe it. Then I ask for a photo. He grins. For my friends back home, I say. He says of course. So we stand together and I take a selfie. He’s pointing at me like I’m the man.

Then, all at once, it’s over. We shake hands again and he gets in his car and leaves. I give my email to the doorman, who also adds me to Carlinhos’ Facebook. I thank him profusely and stand there on the street slapping him on the back like an idiot, grinning wildly. He grins too. I think he knows how ridiculously lucky I have just been, and how much of a big deal this is for me. We say goodbye, and I get an Uber back to my percussion lesson in Pelourinho.